The Pulsefire Dart gets a lot right but remains a tough sell, especially if you’re looking for a lightweight gaming mouse
Following its release two years ago, the Pulsefire Dart remains HyperX’s only contender in the race for the best wireless gaming mouse. Unfortunately, time has not been kind to this rodent, and features like Qi wireless charging simply aren’t enough to keep it from falling behind its competition.
This isn’t to say that you shouldn’t at least consider the Pulsefire Dart or that it’s a bad gaming mouse, because it isn’t. In fact, there’s a good deal that HyperX has done right with it, starting with a good, solid build quality. A combination of premium plastics and leatherette side grips make this clicker feel solid and tight in your hands, and the split-button design for the left and right mouse buttons should help keep any misinputs at bay.
You’ll find six programmable buttons on the Pulsefire Dart’s chassis, all of which are programmable via HyperX’s Ngenuity software (which we’ll discuss more later). The mouse’s Omron switches produce a satisfying click without a trace of wobble or flimsiness, and I had no issues whatsoever with input recognition in either wired or wireless mode. They’re also rated for up to 50 million clicks, so there’s no reason to be concerned about durability.
HyperX describes its body shape as ‘ergonomic’ but it’s more accurate to say this is designed for right handed players who use either a palm or claw grip style. Those with a preference for a fingertip grip, like me, may start to notice some discomfort after extended sessions. Furthermore, if you’re left handed, you’re better off considering a mouse with a symmetrical body.
The most contentious element of this wireless mouse is undoubtedly its 110g weight – and it truly feels heavy. It’s fair to say that the Pulsefire Dart would likely be lighter if it forwent its battery, but it’s more likely that its Qi wireless charging functionality is the core culprit here. While the feature offers a convenient method of charging, it’s not compelling enough that I’d prefer it over connecting a wire directly to the mouse.
However, I can commend HyperX for using Qi wireless charging rather than developing a proprietary solution, unlike Logitech and Razer. This decision lets you use a wide range of charging devices that may also be compatible with your smartphone, rather than forcing you down an entirely exclusive and more expensive ecosystem. 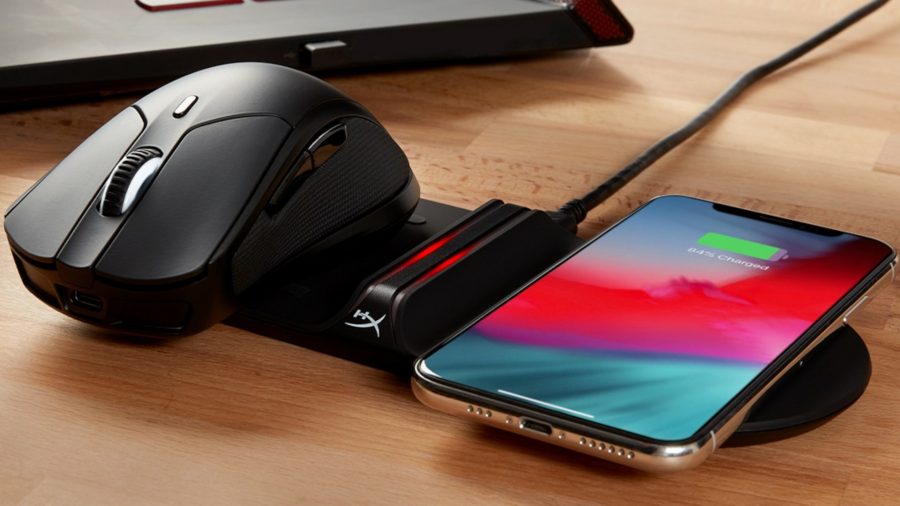 Turning to more technical specifications, for you data enthusiasts out there, the Pulsefire Dart is equipped with a Pixart PMW3389 sensor, boasting 450ips (inches per second) and a polling rate of up to 1,000Hz, which should be more than enough to keep up with your inputs. Its DPI ceiling of  16,000 is comparatively low to other wireless mice at this price point, but it’s more than enough for me, and toggling between three customisable presets is simple enough with the button below the scroll wheel.
Connecting to the 2.4GHz USB-A dongle means you’ll get a zippier wireless connection than what you get using Bluetooth, which is absent here. You can even strengthen your signal with HyperX’s included extension, which can put the adapter into the line of sight of your mouse – plus, it’s handy if you want to quickly swap the dongle out for a charging cable, rather than rummaging around behind your PC. Unfortunately, there’s nowhere to house the USB dongle inside the mouse if you’re travelling, so it’s not the most portable solution.
Pair your rodent with one of the best gaming keyboards
Battery life is rated up to 50 hours, increasing up to 90 hours if you turn off both of the mouse’s lighting zones. Keeping the lights on, I found HyperX’s claims to largely hold true: it takes several eight-hour work days followed by lengthy evening gaming sessions before I need charge it. Juicing it up with a USB-C cable takes around 1-2 hours, while Qi wireless charging takes much longer. Worse still, there’s no indication as to when the battery is full if you’re using a wireless charger, as it indefinitely maintains a breathing effect with its lighting zones.
While the Pulsefire Dart’s hardware provides a solid user experience, HyperX’s Ngenuity software really lets it down. In fairness, it’s currently in beta, but it’s got a long road ahead before it can compete with the likes of Corsair’s iCue or Razer’s Synapse. 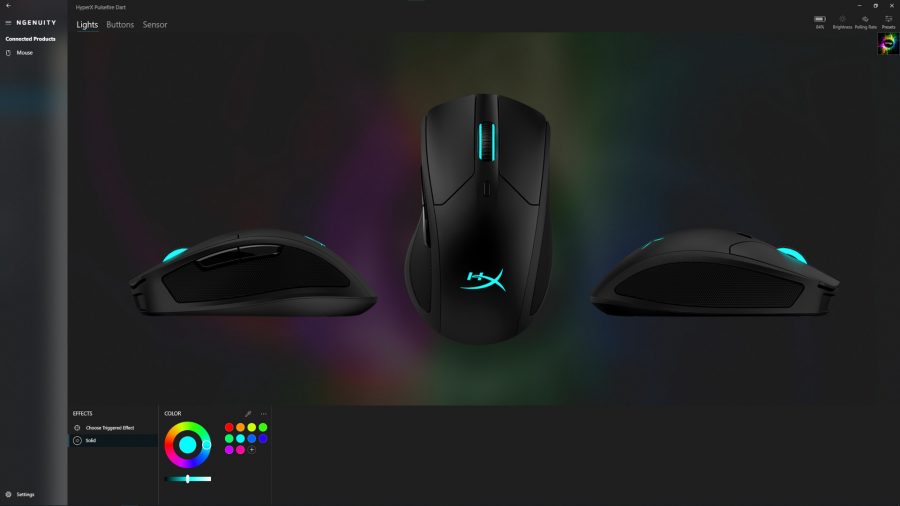 In its current form, Ngenuity delivers the basic functionality you’d expect from peripheral software. In the ‘Lights’ tab, you can customise the Pulsefire Dart’s two lighting zones with either a looped or triggered effect, with very few presets to choose from. Meanwhile, the ‘Buttons’ and ‘Sensor’ tab let you rebind buttons and configure DPI, respectively. There are also controls for lighting brightness, polling rate, and creating presets that can be saved to a single profile on the device’s onboard memory.
Unfortunately, my main gripe with Ngenuity is its stability – or lack thereof. It crashed multiple times during my time with it, the majority of which occurred when I removed and re-plugged in the Pulsefire Dart with my gaming PC on. Worse still, the program told me several times that the battery was low when this simply wasn’t the case. Turning the device off and on again resolved this, but users shouldn’t be expected to do this, especially with the aforementioned repercussions.
Its $99.99 / £119.99 price tag makes the Pulsefire Dart a tough sell, and it’s far from the best gaming mice out there. Its build quality and specs are solid, but its weight seriously drags it down (literally), and the Ngenuity software hampers the experience of using it even further. Thankfully, given its age, you can often find HyperX’s wireless clicker on sale, but we only recommend you consider it rather than outright recommending it.
Get involved in the conversation by heading over to our Facebook and Instagram pages. To stay up to date with the latest PC gaming guides, news, and reviews, follow PCGamesN on Twitter and Steam News Hub, or download our free app for Overwolf.
The great experience offered by the Pulsefire Dart’s build quality and specs can’t escape being dragged down by its weight and unreliable software. HyperX are capable of making fantastic mice, but this one unfortunately falls short.
Samuel Willetts Hardware Writer
Published: Dec 31, 2021
Samuel’s spent many a day with his hands inside the guts of a rig, for as long as he can remember. While he spent most of his childhood overwriting his dad’s Baldur’s Gate saves, you can now find him playing Back 4 Blood or Halo: Infinite (that is, of course, until Elden Ring comes out).